There's much ado about Shakespeare this year as the Bard turns 450 years old. 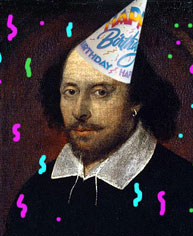 I've never met a Shakespeare play I didn't like. At least not in my adult life. In high school it was a different matter. Thanks largely to my English teacher Miss Pike, whose job it seemed was to make sure her class of 35 thirteen year olds would go through life avoiding his works like the plague. Henry IV Part 1 was the first play she had us read.

Sitting at our desks taking turns to plow through the lines with about as much expression in our voices as a brick wall. It might not even have been Part 1. It might not have even been Henry IV. It could have been any one of his 37 (38 if you count the contested Cardenio) works. We never discussed the play, we never explored the similarities between Prince Hal and the fun-loving boys in our class. Or the fact that Tottenham Hotspur soccer club was named after Hal's nemesis, Henry Percy "Hotspur".

As for Sir John Falstaff. Well, the only impression we got of what is probably Shakespeare's greatest characterization of a rogue, was that he was an ageing drunk. Except given that our school was headed by a Methodist, the drinking part was undoubtedly omitted. Falstaff, though, was just the kind of character kids would have loved to have learned more about. He was so well liked by Queen Elizabeth I that after he was killed off in Henry V, she insisted Shakespeare resurrect him, which he duly did in The Merry Wives of Windsor. Same name, same character traits and no mention whatsoever of his having risen from the dead. 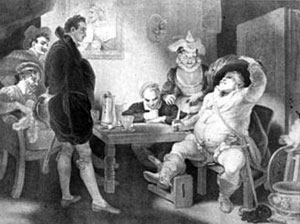 Falstaff's favorite watering hole was the Boar's Head Tavern, presided over by the ever-accommodating Mistress Quickly. Any hint of Shakespeare's reasoning for her name was glossed over PDQ for fear we might figure out that the Boar's Head wasn't just a place to wet your whistle. Back then taverns and brothels were sometimes one and the same. The mention of which might have gotten us out of the slumped-over-the-desk position we usually assumed while listening to the monotonous ramblings of our classmates as we took turns reading the play aloud and...very...very...slowly.

Miss Pike. Her very name should surely have been impetus to talk about how Shakespeare used names to describe his characters. Take the names in the play Romeo and Juliet for instance. The meaning of "Romeo" is "Pilgrim", which is exactly what he was; earnest to a fault. "Mercutio" was famous for the temperamental mood swings that suited his "mercurial" nature and Benvolio was a "kindly" friend to all. Tybalt in Latin means "he who sees", so it seems only fitting that he be the one who first notices Romeo at the dance where he met his star-crossed lover. While the meaning of "Juliet" is "a down bearded youth", which is somewhat apt given that the role was originally played by a young boy.

So what's in a name, eh? In Miss Pike's case, a lot, because she looked exactly as her name suggests. Tall, thin as a rail and serious as a pikestaff. Terrifying. Had she not been a Miss one would have sworn she had a Scottish Laird under her thumb. Instead of roaming the halls of some great and gloomy Scottish castle, though, it was her duty to wander the corridors of the school, where in her position as Deputy Headmistress she was responsible for enforcing the necessary rules, drawn up to ensure a safe and happy environment. Yes, Miss Pike, with her pince-nez perched firmly atop her beak-like nose, could spot a blob of mascara at twenty paces. The ruler she carried with her at all times kept us in line. Not that she swatted us with it - well, maybe the odd rap on the knuckles - but it was mainly used to measure the length of the girls' pinafore dresses, which could be no shorter than 2" above the knee. Which if "cool" had been a word used by teens in the early 1970's most definitely would not have been.

But I digress. This was meant to be a tribute to William Shakespeare and here I am reminiscing about Miss Pike. The problem is I find it hard to separate the two, for you see you never forget who put that first Shakespeare play in your hands. Or as Shakespeare put it in Hamlet, "'tis in my memory locked". To both the Bard and the bane of my early high school years, therefore, I gratefully raise my glass.