Easter is almost upon us, bringing with it memories of uniquely British traditions.

Hot Cross Buns for instance. In appearance they look a little bit like "shiny" scones, but they are stodgier and spicy and have a cross down the middle. They are best eaten toasted with lashings of butter. Their origins go back to the 12th century, when they were baked in honor of Good Friday by an Anglican monk.

A more recent tradition involving Hot Cross Buns, takes place at The Widow’s Son pub in London, where on Good Friday the landlord suspends a net above the bar and invites sailors to throw into it a hot cross bun. The tradition dates back to the 19th century when a widow, who lived in the house, before it became a pub, hung a bun up outside the window to welcome her sailor son back from sea.

Sadly, he perished before his ship could dock, but from then on every Easter the sailor’s mother continued to hang a bun up in his memory. Thus began the tradition known as The Widow’s Bun.

Eggs (chocolate and hard-boiled) are also traditionally eaten on Easter Sunday morning. In the North East of England though, hard boiled eggs are used competitively. Egg jarping is a game similar to that of "conkers", only instead of horse chestnuts being bashed together, competitors hold up their hard-boiled eggs with the pointy bit at the top and vie for supremacy by knocking the eggs together. The one that sustains the beating with the least number of cracks goes on to compete against the next opponent and so on and so forth. The World Jarping Championship has been held in the town of Peterlee for over 30 years and I hear that participants have a smashing time!

Another competitive Easter tradition is Bottle Kicking, which has been taking place every Easter Monday for the last 200 years in the village of Hallaton in Leicestershire. It is said to have gotten its start when two lady residents were saved from a charging bull when it became distracted by a hare. So grateful were they, that every Easter they bequeathed to the village a veritable feast, consisting of hare pie, 12 loaves of bread and two barrels of beer.

One year, the celebration was gatecrashed by thugs from the neighboring village of Medbourne who fought the Hallaton villagers for the barrels of beer. Instead of filing a civil complaint, the villagers reveled in the scrummage and turned it into an annual event, adding a procession, a pie blessing by the local Vicar, a third empty barrel painted red and white and a whole lot more tussling.

Once the barrels, or "bottles" as they are known have been carried up Hare Pie Hill competitors from the two villages face each other and see who can be the first to get their barrels across two streams which lay a mile apart. Obstacles include ditches, hedges, barbed wire and members of the opposing team. Broken bones are not uncommon. But eye gouging is reportedly forbidden. Then they repeat with the "dummy" barrel. The winners get to keep the third barrel – providing they have the strength to get it open! 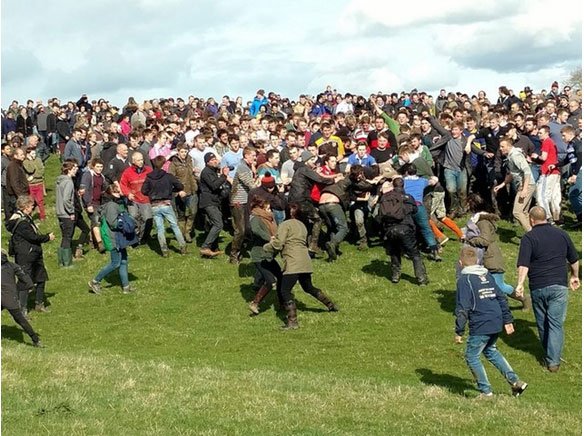 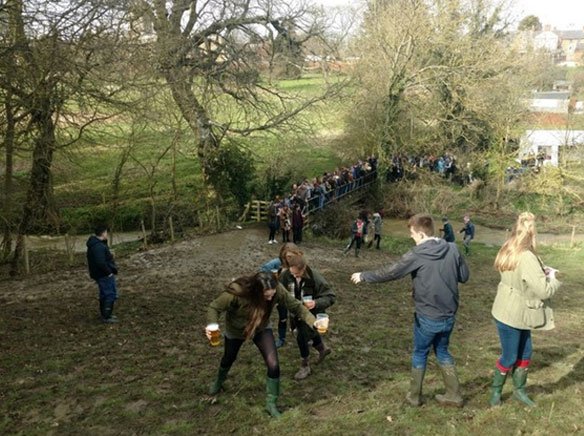