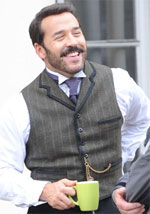 Jeremy Piven as Mr. Selfridge. Actor Jeremy Piven was a fan of the U.K. long before he was cast in the title role of Mr. Selfridge, having studied at the National Theatre in London as part of an exchange program while he was in college. As well as having the opportunity to see theatre productions featuring actors such as Dame Judi Dench and Sir Anthony Hopkins, Piven also became a fan of British comedy shows. Monty Python was one of them and little did Piven imagine that he'd one day be working with John Cleese, who played a cameo role in Piven's HBO comedy series, Entourage. For his role in that show, that of a fast-talking Hollywood agent, Piven received three Emmy awards. Piven was with Entourage for all eight seasons and is currently working on a film version of the show, which will be released in June of next year.

The 49-year-old actor, like Harry Selfridge, grew up in the Midwest. His parents were both actors and drama teachers and he trained at their studio, The Piven Theatre Workshop in Chicago. Piven got his theatre degree at Drake University in Des Moines and went onto attend NYU, but dropped out when he got acting work. His first big television role was in 1992 when he was in another HBO series, The Larry Sanders Show. Piven has also had a very successful film career; Grosse Pointe Blank, Singles, The Family Man, Black Hawk Down, Runaway Jury are just a few of the films in which he's appeared in over the last few years. 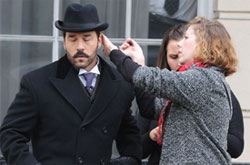 Piven gets his make-up touched up on the set of Mr. Selfridge. As well as television and films, Piven is also a stage actor. His last Broadway appearance was over eight years ago, when he was in Speed-the-Plow with Mad Men star Elisabeth Moss. Unfortunately, Piven had to pull out of the show just a couple of months after it had opened as he was diagnosed with hydrargara, a disease caused by exposure to mercury which may have been caused by Piven eating fish twice a day for a period of twenty years. 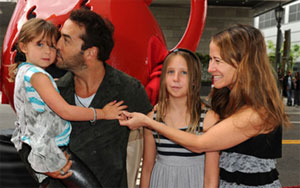 Piven with his sister and nieces. When he's not working, Piven is content to spend time relaxing at his home in Malibu and although there is currently no "Mrs. Piven", the actor says that he'd love to settle down and start a family. The only females in his life right now though are his sister's young daughters, to whom Piven is devoted. Having come from a loving family, headed by parents who, until his father's death, were very much in love, one of the most challenging things when it came to playing Harry Selfridge was understanding how he could be so devoted to his wife and kids and be such a womanizer. Piven has thoroughly loved playing the role and feels it's the best work he's ever done. He'll be returning to England later this month, to start working on series 3 of Mr. Selfridge. Meanwhile, you can see the current series on MPT Sunday nights at 9 o'clock.

To find out more about an actor or British show airing on MPT, write to me.