There are some names that we've seen scroll by on the credits of Afternoon Tea shows for so many years that they seem like "family". One such name is Bob Larbey. So I'm sad to report that Larbey, author of As Time Goes By, died March 31st at the age of 79. 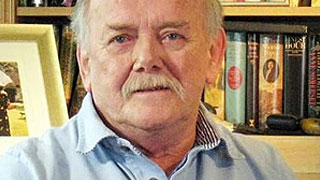 Bob Larbey. Larbey also wrote another series starring Judi Dench; A Fine Romance, but it was as co-writer, along with his long-time writing partner John Esmonde, that Larbey created some of the U.K.'s most cherished TV series. The pair of South Londoners first met while in high school and although Esmonde was younger than Larbey by two years, they became firm friends. It was a friendship that lasted over thirty years and only ended with the Esmonde's death in 2008.

After leaving school and completing their National Service, Larbey, the son of a carpenter, went to work in a foundry, while Esmonde became a trade journalist. At night and weekends the friends would get together and work on radio comedy scripts, which they'd dutifully submit to the BBC. It wasn't until 1965 when they were in their late 20s and the BBC commissioned one of their ideas for a radio sitcom (Spare Change) that they could finally give up their day jobs. 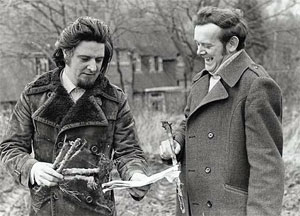 Bob Larbey (right) with his writing partner John Esmonde. Larbey and Esmonde's first hit comedy series was Please Sir! which ran from 1968-72 and starred John Alderton (Upstairs, Downstairs) as a novice school teacher with a very disruptive class in a poor part of London. The pair's next hit followed not long after when The Good Life (Good Neighbors) hit the UK TV screens. Larbey got the idea for the series as he was approaching his 40th birthday and realized he wasn't alone in reassessing his life.

The Good Life was the perfect vehicle for a series the writers had been asked to create by the BBC for actor Richard Briers. During the course of the show, Briers also had a request when he approached Larbey and Esmonde one lunchtime saying "Lads – you know what? I'd love to play drunk." Egged on by his co-stars Penelope Keith, Paul Eddington and Felicity Kendell, the writers took Briers up on the opportunity and wrote an entire drunk scene lasting almost ten minutes. The episode, titled "The Wind-Break War", became one of the most memorable of the show which ran until 1978.

Most memorable for Larbey and Esmonde though was the final episode. It was officially titled "When I'm Sixty-Five", but the writers nicknamed it "The Royal Special" as it was penned and performed especially for Her Majesty Queen Elizabeth II. The Queen was reportedly a huge fan of the series and having Her Majesty and Prince Philip in the studio audience was a huge honor.

Airing Larbey's work has also been an honor for MPT and you can see what is probably his most acclaimed series As Time Goes By Mondays through Fridays at 2:30pm on Afternoon Tea.

If you have a favorite Afternoon Tea actor – past or present – that you'd like to know more about, drop me a line and I'll see what I can find out.