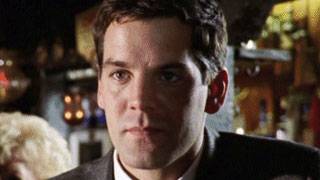 Tall, dark and handsome would certainly seem a good description of actor John Hopkins, who plays Sgt. Daniel Scott in Midsomer Murders. The 6' 2" tall, "Hoppy" as he's known to his friends, doesn't just have classic good looks, he's also a classically trained actor, having studied his craft at London's Royal Academy of Dramatic Art and worked extensively with the Royal Shakespeare Company.

Hopkins, who was born in 1974, joined the cast of Midsomer in 2003, taking over from Daniel Casey who played Tom Barnaby's first deputy, Gavin Troy. The two characters couldn't be more different. While Gavin was a local who could always be called on to provide a local slant on a case, Londoner Daniel can't abide living in the country. Hopkins actually enjoys country life and he relished the opportunity to work in the pretty English villages in which the series was set. In fact, walking through the countryside is one of the actor's favorite pastimes. 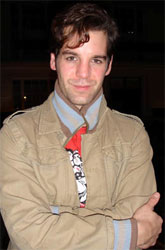 Hopkins stayed with Midsomer for only two series; a total of 14 episodes and in between the two series he worked in Prague on a film being made by some friends. In it he played an action hero type. "It was great to do something so different from Midsomer Murders", Hopkins said at the time. An indication perhaps that he wasn't enjoying his time on the popular series? It was rumored, in fact, that John Nettles and he didn't get along.

Hopkins departure from Midsomer was never really explained and he immediately returned to his first love; the stage. He worked for almost a year in the West End in the play 39 Steps. He also appeared in Tim Burton's Alice in Wonderland. Hopkins most recently appeared with the RSC in their productions of Antony and Cleopatra and The Tempest, where he starred alongside Patrick Stewart.

One of the television series Hopkins appeared in prior to Midsomer was MI-5 and next week we'll be taking a look at a long-time fixture in that series, actress Nicola Walker who played Ruth. You can see John Hopkins next Monday when we bring you two back to back episodes of Midsomer Murders, starting at 8pm.

Remember if there's an actor you'd like to see featured, or if you have a question, write to me.